Mustafizur Rahman is an international professional Bangladesh National team cricketer. His height is 5 feet 11 inches. Anyway, He has played first test cricket of his life on 21 July 2015 against South Africa team and last test match has played 15 March 2017 against Sri Lanka.

Here, the user can get Mustafizur Rahman of bowling average, current teams, height, ranking, wickets, personal life, girlfriends, bowling speeds, wife, wedding and also more. In truth, he is a bowler of the Bangladesh cricket team

In fact, his batting system is the left-handed batsman and also bowling style left-arm medium-fast. He was born on 6 September in 1995.

He has got his third five-wicket haul in the last match for that reason he could not contribute much in the T20 series. Mustafizur injured his shoulder against Zimbabwe in January 2016.

Afterward, he joined to play Asia cup Cricket 2018 in the 15-man squad.

In the IPL auction of the 2016 season, he was drafted by the Sunrisers Hyderabad. He took 17 wickets in 16 matches in the full tournament. For that, he was named “Emerging Player of the tournament” also being the first player to receive this award. Cricketer Mustafizur selected by the Lahore Qalandars in the PSL or Pakistan Super League but BCB was reluctant to let him play there.

Mustafiz, Taskin and Rubel Hossain are playing in Bangladesh team as the fast bowler. Mustafizur has joined the Indian Premier League 2018 in the Mumbai Indians team by the IPL salary fee of Retained Rs.2.2 crore.

Mustafiz played the West Indies ODI series in the first match started on 9 December 2018. He scored 3 wickets by 35 runs.

Mustafizur is an Icon player of the BPL  and his team Rajshahi Kings in 2019. It starts on 5 January.

The date of the couple marriage ceremony fixed on 22 March Friday. His future wife name is Samia Parvin Shimu. Basically, Mustafiz will marry his cousin. Mokhlesur said that Samia Parvin Shimu is the daughter of their maternal uncle Raonagul Islam from Hadipur village Upazilla Debhata in Sathkhira

Cricketer Mustafiz was named in the ICC Cricket World Cup 2019 teams in Bangladesh. 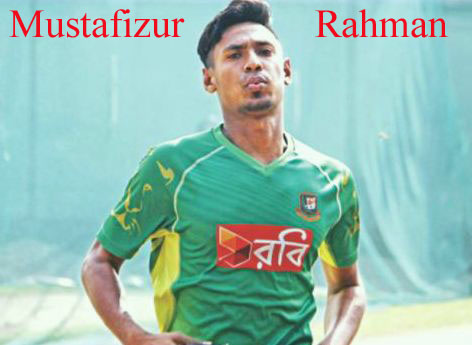 In finally, you can get this site more cricketer profiles and all celebrities and more of the world. We expected that you have got more information about cricketer Mustafizur Rahman bowler details.

If you think any information to give make mistake then, comment to us anytime. We will try to back of your question or comment of information.